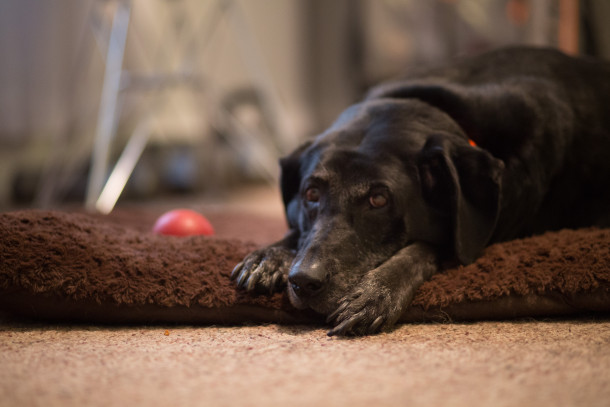 Quick disclaimer: There are two kinds of people in this world, animal people and people who just don’t get us. If you are one of those that doesn’t get us, you might want to skip this blog and just come back on another day.

I’m an animal person. Specifically, a dog person. My husband and I don’t have children, but we have dogs. Dogs that we love so wholeheartedly that we spoil them rotten. We even allow them to sleep in our bed. Crazy, I know. If you know me on a personal level at all, you probably know my dogs. They’re family members to us. We don’t think of the Grants as the two of us, but the four of us. But now just three of us. I say dogs, because I’m still not used to the idea that the word dog is now singular instead of plural. I’m not used to the idea that the dog food doesn’t need to be filled as often as it used to.

Here’s a quick overview of last week: On Sunday we came home from a weekend away and noticed Lucy was limping on her right front paw. On Monday she was limping on both right paws. I googled a little and suspected a stroke. It said dogs usually improve in a day or two if they’ve had a stroke. Tuesday she wasn’t using three out of four paws. Both back paws and the front right. We knew something was wrong and tried to get her into the vet. The earliest he could see her was Wednesday afternoon. We babied her, carried her in and outside for her potty breaks, and tried to keep her as comfortable as possible. We google more and thought maybe she’d ruptured disks in her back. The vet on Wednesday agreed that maybe it was a back problem, so he sent us to an animal ER in Ft. Wayne where they could do CAT scans and do surgery if needed. We took her in late Wednesday night and waited while they ran X-Rays. The vet came in obviously very flustered and had to tell us that Lucy had an inoperable tumor on her spine that was causing paralysis. We sobbed. We took her home and made her comfortable for the night. We spent the night in the living room to be near her and hear if she needed anything. I slept 1hr and 9 minutes according to my Jawbone. We doted and loved for one more night. Then she was put down on Thursday. Our vet even came in on his day off to help us relieve her suffering.

Our sweet Lucy seemed completely normal, young, perky healthy, and perfect… until she wasn’t. The previous week we’d been playing ball with her. She’d been running gleefully around the yard like she always did. We don’t know how long Lucy had cancer, but by the time we knew, her life had lost almost all of the qualities that made it hers. By the time we knew Lucy had cancer, she was no longer able to be… Lucy! The death of Lucy was shocking, abrupt, and scary. I’ve spent the last few days trying to put all the pieces together and overcome overwhelming emotional wounds.

If I’m honest, I had no idea how much I loved that dog until I lost her. The days leading up to her death were stressful and anxiety filled. Then after her death the hole she left in our lives was very apparent.

A few of the things I’ve learned since her death:

So much of my thoughts for her were part of my daily routine. They were subconscious, almost mundane, and I was unaware of what a comfort and companion she was to me.

Lucy had the ability to look into your soul. To quote my friend Lauren “She had human eyes” a full range of complex emotions, and she was able to empathize with sickness or frustration. When I was having a bad day she would try to cheer me up. When I was sick, she’d lay next to me and make sure I was ok. Who could ask for more???

We got her when she was a puppy only 6 weeks old in December of 2002. She was always a beloved pet. She was neurotic, needy, and a little too energetic. She destroyed a couple sentimental items when she was a puppy and I was so furious I didn’t think I’d ever forgive her, but looking back now I’d so much rather have had her than the items she chewed up.

Over the last three years, Lucy became my closest companion. Since my husband had become a traveler, a road warrior, I was often home alone. I used to try and avoid being home when he was out of town, but I eventually came to really enjoy the comfort of being “alone” at home because I had her. When David was gone Lucy would always come sleep right next to me. She’d check up with me more often. She’d nudge me with her nose and pace the house looking for David, letting me know that she missed him too. We were in it together. So much about being home meant being with her. Now that she’s gone… I feel like I’m not home. Or not AS home? It’s unsettling and I’m having trouble finding a way to be fully at ease when I’m home.

Since she’s been gone I’ve cried so many times that I’m officially chronically dehydrated. I have cried more over her death than any human death I’ve ever experienced. I started to feel like that was ridiculous, but then I realized I’ve never lost a human that was part of my household. Lucy was a massive part of my daily routine and I’ve decided that it’s ok to cry about it.

Through the tears I’ve had two resounding emotions. Love and gratitude. When we went to the vet for Lucy’s final moments the vet got choked up as he told us “you gave her a good life”. He’s right. We did. But more amazing are all the things she gave us through her life. We have nothing but happy memories of her and I’m so so so so grateful that WE got to be HER people. I’m so thankful that we were allowed to love and experience her. I don’t think I’d be the same person I am today if I hadn’t shared the last 12 years of my life with that silly, crazy, funny, loving dog. In some ways I feel like she raised me and not the other way around.

Here are cell phone pictures of some photos that were in a scrapbook. Some of the first photos we ever took of Lucy.

Here’s the first photo ever. Early December of 2002. I got her for David as a late 21st birthday present/early Christmas present and as a companion for Cody, who would get lonely during the day when we were away at work or school.

I didn’t chose her at the pound. She chose me.
She begged me with her cries and eyes to take her home. I held her once and suddenly didn’t care about any other dog in the place. She was the one!

This was our first Christmas as a married couple. We sent a similar photo out in our Christmas card that year. 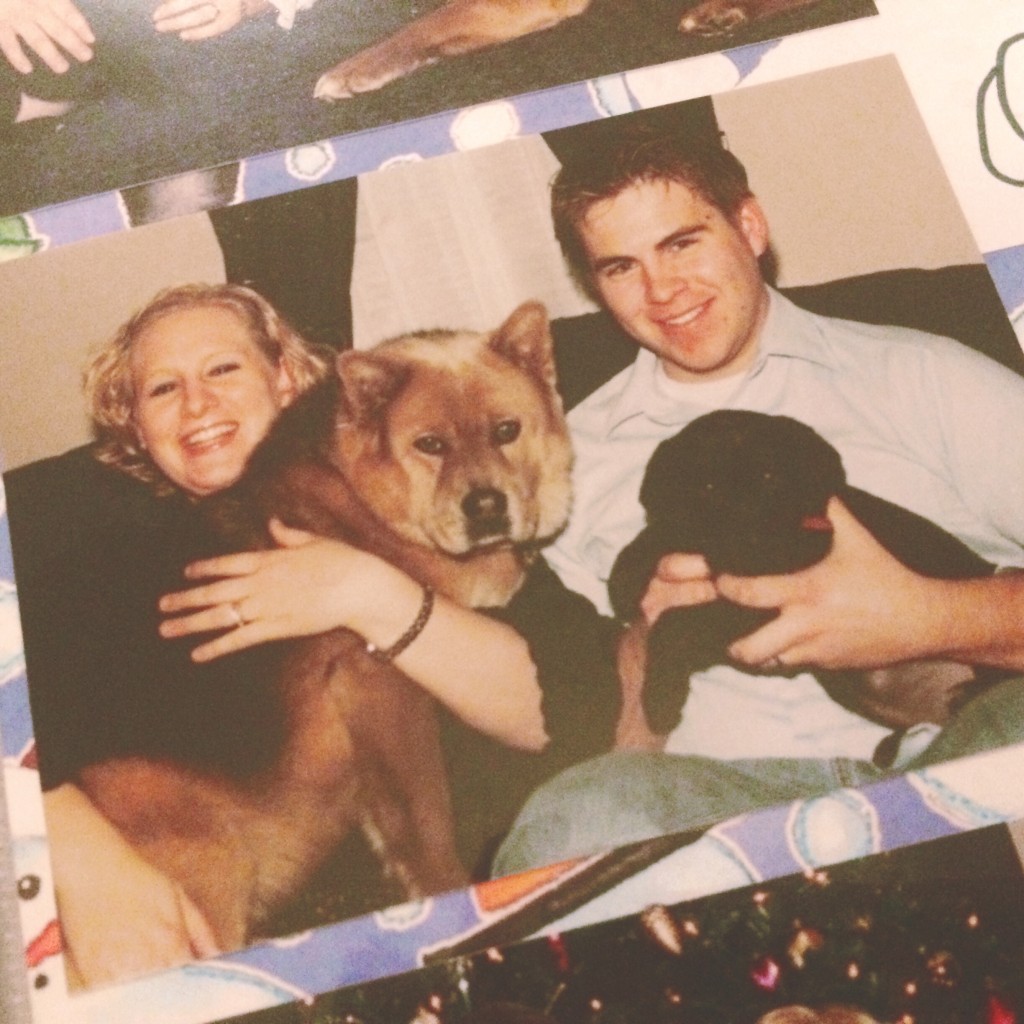 One time we thought it’d be really cute to buy her a sweater… I’m pretty sure she ate it off. She hated it. 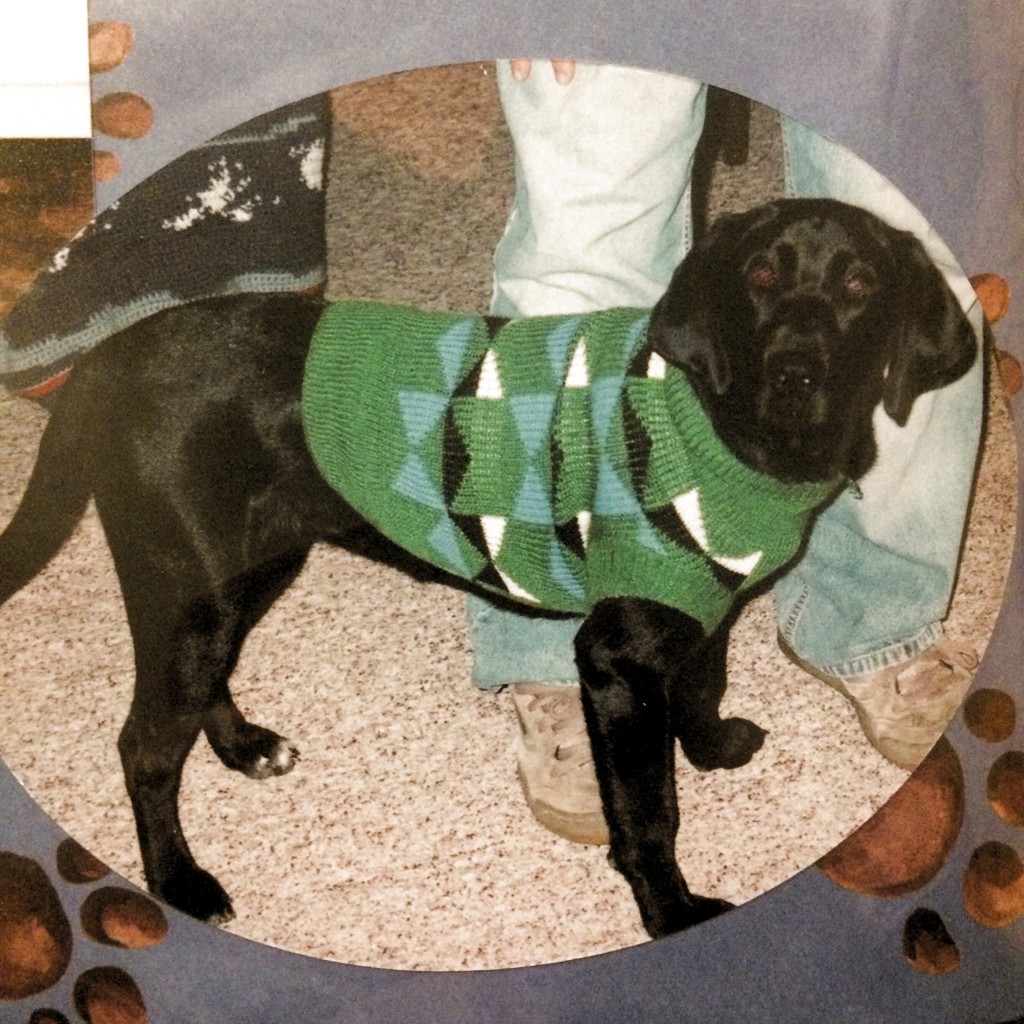 And another time we bought her a dog bed and she ate the bottom right out of the bed leaving only a ring of stuffing around her. When we found her sitting in the middle of the ring it was too funny not to document. 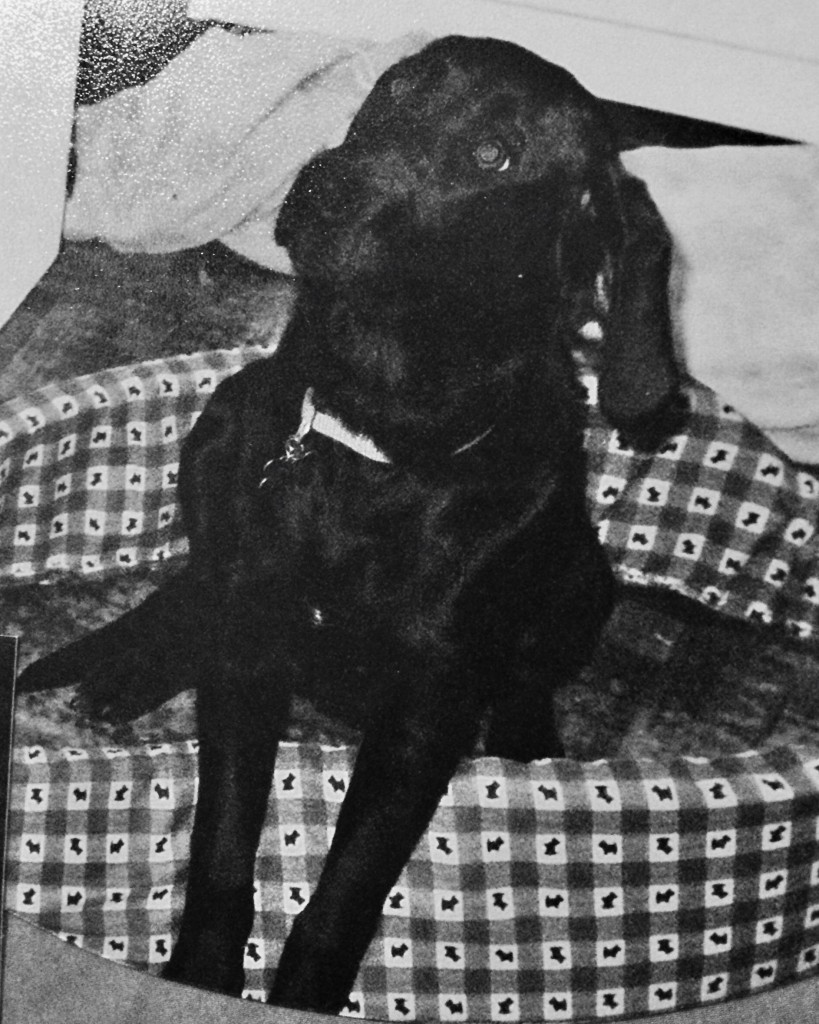 Here are some from about five years ago… 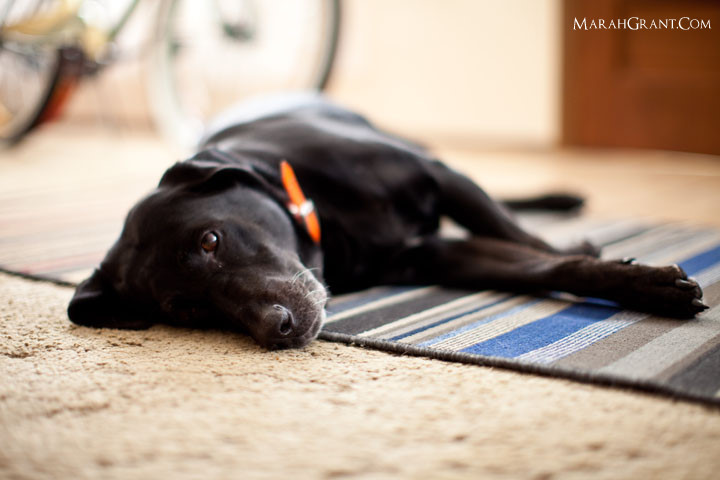 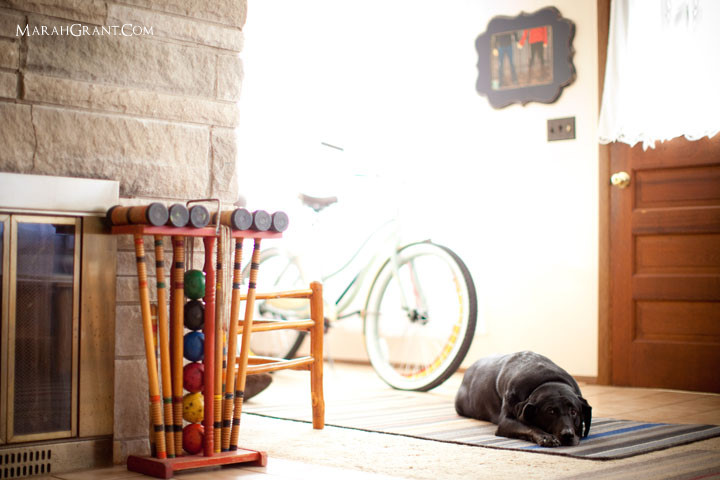 She did nap a lot, but I realized most of the photos I have of her are when she was laying around… mostly because it was hard to get shots of her in motion. The photo below is more of her natural state. 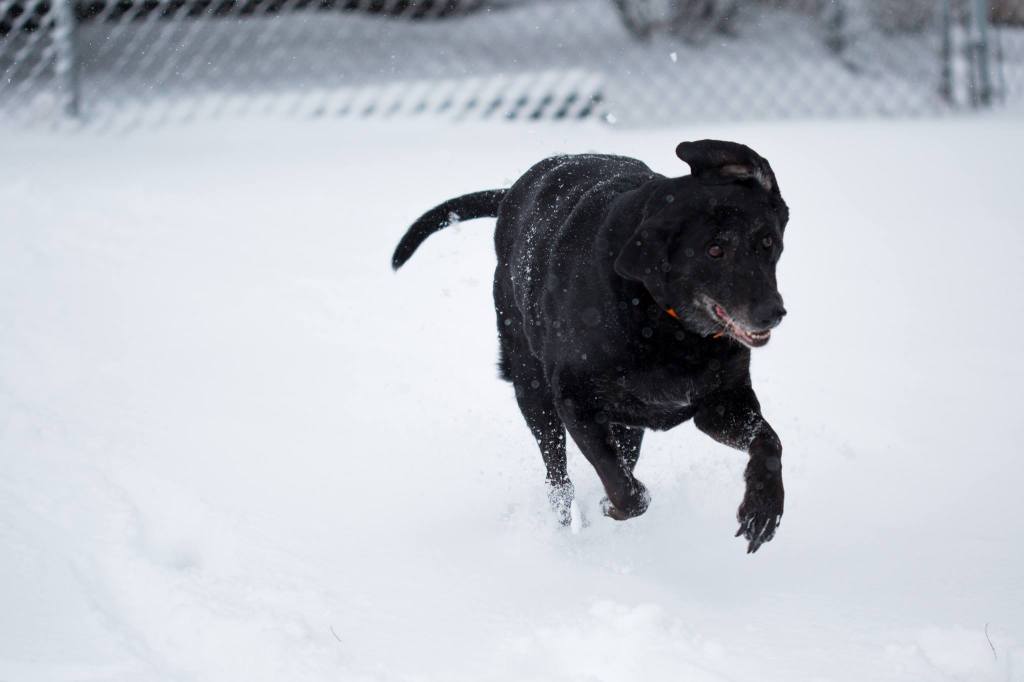 And only two hours before she passed… You can see in her expressive eyebrows that she’s miserable. 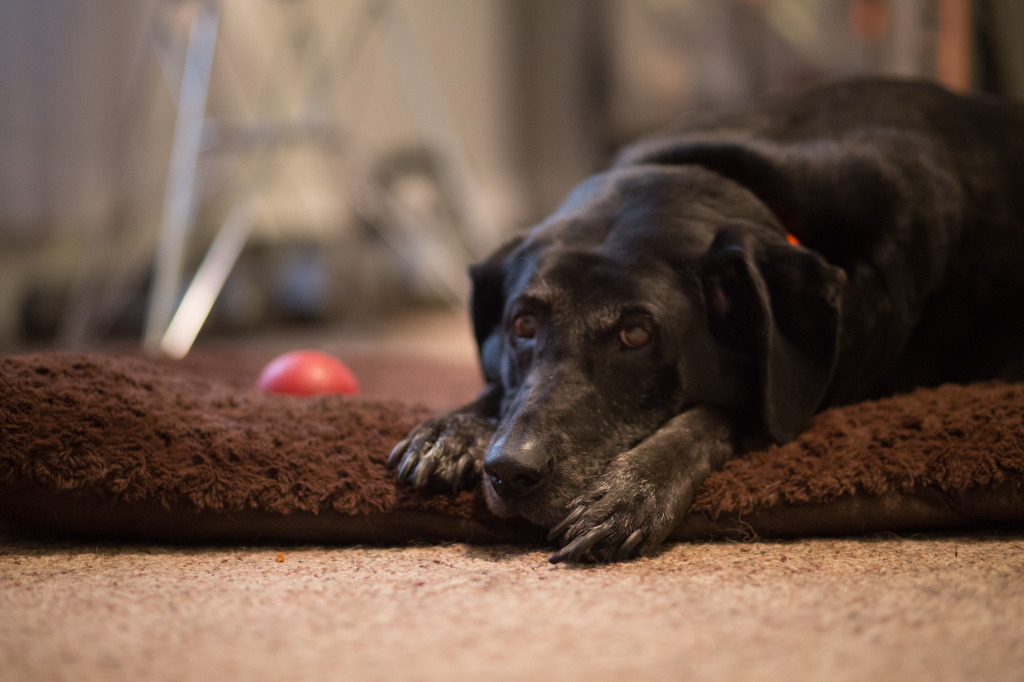 A few things about Lucy that I never want to forget:

What an amazing friend. She’s irreplaceable, that’s for sure!
So, one last time I’d like to say, “Who’s a pretty girl? Lucy is! Lucy’s a pretty girl!”

Lovely Lady Lucy, a huge light in my life. 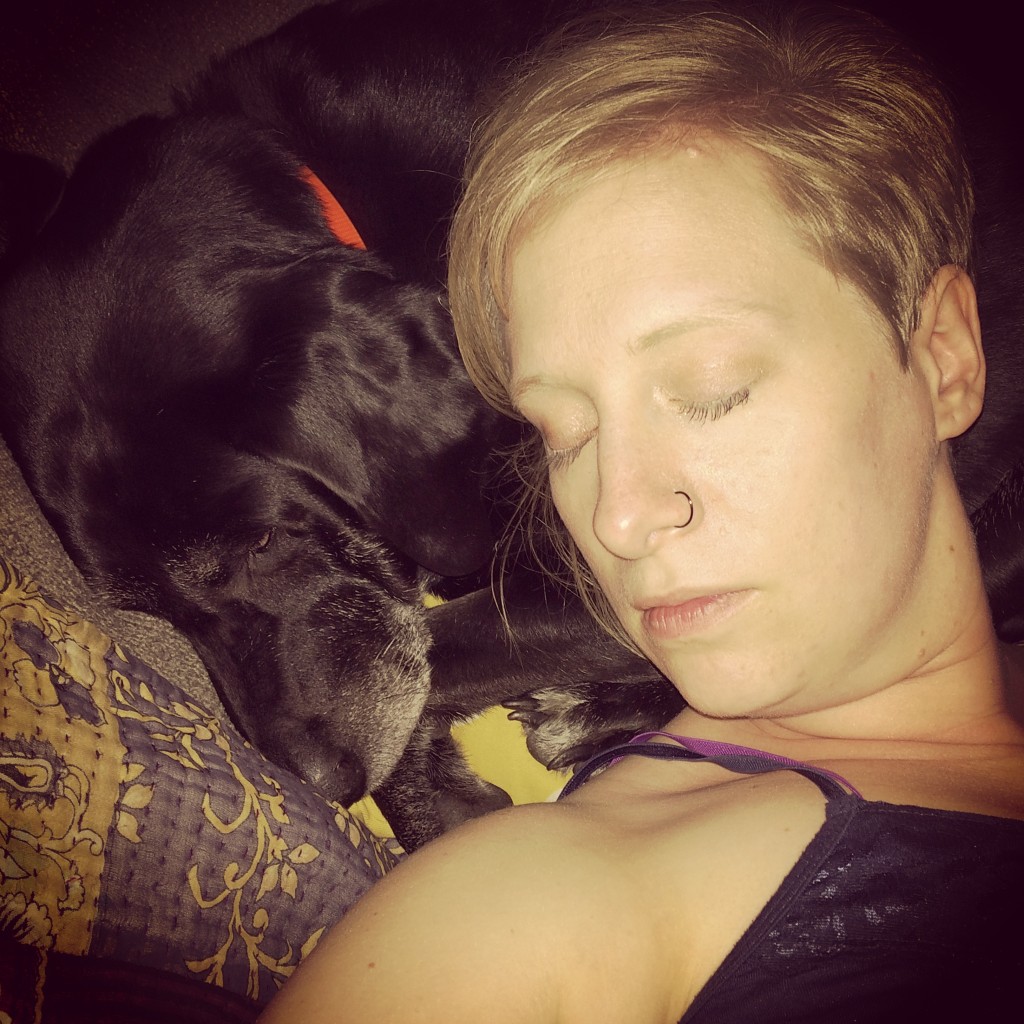 Thank you for sharing these beautiful pictures and memories with us! The Holsteins are definitely praying that God sends lots of comfort and healing to the Grant household.

bawling! I cannot imagine. Thank you for sharing your love and heart and happiness and sadness for this great puppy!!!

Well I am glad I read this before I put my makeup on!! This was so beautifully written and paired with your pictures, this was a heartfelt glimpse into your heart over Lucy. I am so sorry for you and David’s loss. I have a huge hug waiting for you friend. But for now…(((HUGS)))

This was a beautiful tribute to Lucy. You have such a magical way with words and feelings. Wow! I not only love you dearly, but I admire you in so many ways. Keep on for our Lord, sweet Marah!

[…] four months ago I posted this tribute to my dog Lucy who had very suddenly passed away from cancer. Before I’ve even had a chance […]